In the current Internet typically live video streaming services operate at the application layer (e.g, P2P Live) and not at the network layer. The main reason for this is that multicast is not widely available in core-routers due to its high deployment and operational costs. In this project we aim to develop Lcast, a new multicast protocol that takes advantage of LISP, and therefore avoids deployment in these core-routers.

The rapid growth of broadband access speeds has popularized multimedia services that nowadays contribute to a large part of the Internet traffic. A considerable amount of multimedia content, such as popular live events commonly conveyed through IPTV, require live streaming from a source to a large set of users. For such content, network-layer multicast is the most efficient solution. However, although intra-domain multicast is available in many domains, multicast has not been widely deployed. The main reasons for this are that enabling inter-domain multicast requires upgrading a large subset of the existing routers and complex network management, tasks that amount to high capital and operational expenditure. As a result, and during the last years, the industry has designed several peer-to-peer live (P2P Live) systems (e.g.) for video streaming. These systems operate at the application layer, and create complex overlay networks to distribute multimedia content. These applications are very popular and are being used daily by millions of Internet users. Unfortunately, it has been shown that in practice these live streaming systems are unable to provide a satisfactory quality of experience at all times  As a result, and since the companies behind these applications cannot guarantee a quality of experience to their costumers, their business model is based on advertisement, and not on charging the subscribers for the contents that they broadcast. Because of these reasons, application layer-based multicast cannot guarantee a reliable streaming service, and cannot be considered as the long-term solution for broadcasting live multimedia content over the Internet. In this project we advocate for a network-layer approach as the long-term solution. In particular, we aim to design a new multicast protocol taking advantage of LISP , therefore avoiding implementation within core-routers.

LISP already includes support for multicast, but the specification also requires multicast support at the core-routers. As we have stated above, we aim to avoid this requirement because of its high deployment cost. Instead, we propose to take advantage of unique clustering properties that are inherently present in LISP. In LISP, clients are assigned EID addresses, and are reachable through RLOC addresses, that in turn are configured at border routers. This way, all clients that belong to the same AS will be behind the same set of RLOCs. The LISP Mapping System provides this clustering information. Taking this into consideration, the source site's xTR is aware of the clustering of the receiving clients into RLOCs. In this project we propose to build an overlay distribution tree in the RLOC space, that is, between the xTRs, to efficiently distribute the video stream.

As an example consider the figure above. It presents an overlay distribution tree built in top of the RLOC space, than can efficiently distribute the video stream from the source to the clients. As the figure shows, only xTRs must be updated, while core-routers remain unchanged. This overlay distribution tree is realized with a unicast-only core, hence, no multicast-core support. On the contrary, at the source/receiver's domain the video stream is conveyed using intra-domain multicast.

In this project we aim to research and design algorithms to efficiently create this unicast overlay distribution tree. The work aims to extend the existing LISP-Multicast draft, and to reuse as much as possible existing protocols and signaling messages. We will design such algorithms enforcing a given packet replication factor at each xTR, and we will take into account the trade-off between the maximum packet replication per xTR and end-to-end delay. Finally, we will evaluate the protocol using trace-driven simulations of realistic scenarios. In particular we will monitor existing P2P Live networks to analyze clustering of subscribers into domains and their churn, and then we will evaluate the proposed algorithm under the same conditions.

This LISP multicast architecture has important advantages: (i) It does not require inter-domain multicast support at core-routers (ii) It avoids costly packet replication by keeping it to a predefined value, (iii) reduces the complexity of churn since clients (EIDs) entering/leaving the distribution tree does not have a direct impact at the overlay distribution tree and (iv) as LISP, it is incrementally deployable and does not require modifications at the end-hosts. 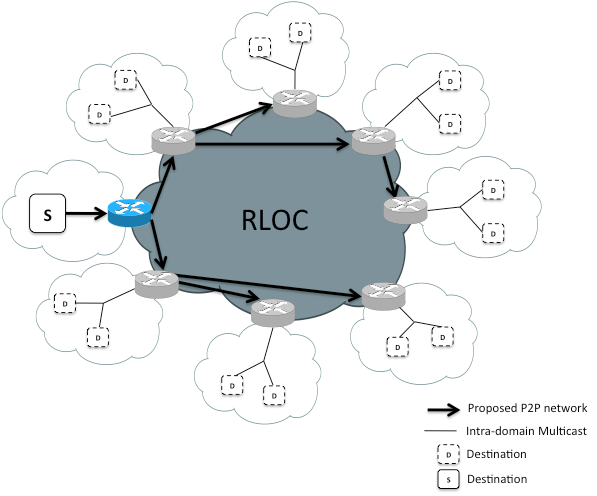